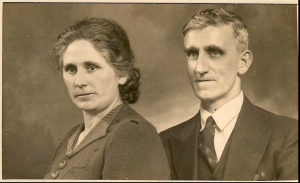 Some time ago I wrote about discovering my grandparents had been involved in a train crash which left my granny injured. You can read the post by clicking here. Surprisingly this was the first most of my generation of the family had heard about the accident even though it must have been such big news at the time. The report was in an English newspaper and I hoped to find a local newspaper report. This is from the Wishaw Press which is now available online through the British Newspaper Archive.

Less than a week after the crash my granda was back at work even though he suffered shock. I suppose he would have no choice. The article mentions how he was well known in the village as a football referee. He’s mentioned in a few Wishaw Press articles relating to football as well as in the Scottish Referee.

It’s nice to see my granny was in good spirits after the trauma. She must surely have feared for her life. They certainly were lucky to escape with their lives.

2 thoughts on “An Alarming Experience – Hugh Brawley and Catherine Cosgrove”